Billy Boy Arnold, born in Chicago on September 15, 1935, is one of the prime architects of the electric Chicago-blues sound of the ’50s and a major influence on the British blues revival of the ’60s. At 14, Billy Boy was captivated by the music of the original Sonny Boy, John Lee Williamson, and visited Sonny Boy at his home in Chicago for a series of informal harmonica lessons just before Williamson’s untimely death in 1948. Billy Boy’s recording debut was the 45-rpm Hello Stranger b/w I Ain’t Got No Money, released in 1952 on Chicago’s Cool label. After teaming with street musician Ellas McDaniel (a.k.a. Bo Diddley) and moving to Chess, Billy Boy played harp on the March 1955 classic I’m a Man. Not content to be a sideman, Billy Boy signed to VeeJay and recorded the original versions of I Wish You Would and I Ain’t Got You—both later covered by Eric Clapton and The Yardbirds. I Wish You Would was also covered by David Bowie on his 1973 LP Pin Ups. Billy Boy is one of the last of the Chicago-blues originals and one of the most important and treasured exponents of American music performing today. 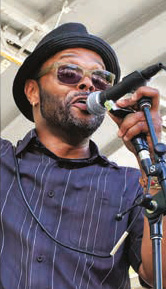 Omar Coleman, born in 1973, isn’t afraid to cross genre lines. The harmonica player is rooted in the Chicago blues tradition, claiming deep admiration for Junior Wells, Little Walter, Sonny Boy Williams (both of them!), and Snooky Pryor, yet he also draws from R&B, folk, funk, soul, and gospel to create his distinctive, intoxicating sound. Still early in his career, Omar represents an exciting new direction that the blues are taking as it evolves and grows into the next generation. 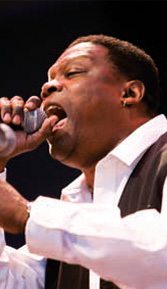 Mike Avery’s blues roots run deep. Mike came up on the West Side of Chicago in the same building as his cousin, the blues titan Magic Sam. As a teenager, he enjoyed the perks of Sam’s regular backyard barbeques, which performers like Otis Clay, Tyrone Davis, and Betty Wright would often attend and play blues for the other partygoers. In the mid-1970s, Mike began singing at the Majestic Lounge on 14th and Pulaski with the house blues bands, Scotty and the Rib Tips and Johnny B. Moore. He spent much of his career focused on creating R&B and soul music, but his heart has always been with the blues. “I’m not on the blues circuit, but that’s where my roots are. I couldn’t deny it if I wanted to. Giving me a good blues tune to sing is like taking me back home.” 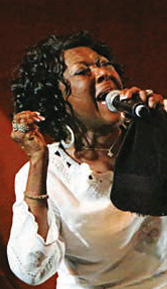 Leanne Faine’s vocal skills date back to her time in the church choirs of Inkster, Michigan, where traditional gospel songs of the late Reverend James Cleveland and Evangelist Shirley Caesar were strong influences in her life and her musical career. At the age of 15, she sang with the Southwestern Michigan State Choir as a lead singer under the direction of the late Mattie Moss Clark. Leanne then relocated to Chicago and recorded with several groups and church choirs. There, she met the Grammy Award-winning Reverend Milton Brunson and the Thompson Community Singers, also known as the Tommies. As their premier lead vocalist, she sang on countless top songs with the Tommies. A powerful voice in the traditional gospel style, Leanne continues to move and amaze her audiences. 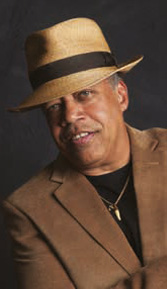 Billy Branch, born in Lake County, Illinois in 1951, was discovered by Willie Dixon while Billy was still in college. After graduating, instead of going to law school, Billy hit the road with the Willie Dixon Chicago All-Stars, touring for six years and earning a doctorate in the blues. Since then, Billy has played on over 150 different recordings with everyone from Johnny Winter to Lonnie Brooks to Taj Mahal. He received Grammy nominations for three of the twelve albums recorded under his own name, won multiple W.C. Handy Awards, an Emmy, and two Chicago Music Awards, alongside numerous humanitarian achievement awards. In addition to being an important performer in the Chicago blues scene, Billy is an educator, teaching school kids and international political leaders alike how to play harmonica. His internationally recognized “Blues in Schools” Program is committed to teaching both young and old about the blues as the roots of American music. 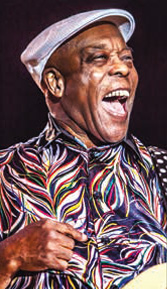 The inimitable Buddy Guy was born 1936 in Lettsworth, Louisiana. The reigning King of Chicago blues, Buddy is recognized as one of the greatest guitarists of all-time. He has carried on the electric Chicago blues tradition forged by such greats as Muddy Waters and Howlin’ Wolf, in the process deeply inspiring the like of Jimi Hendrix, Keith Richards and many others. Eric Clapton has called him the “greatest guitar player alive”. Buddy learned how to play guitar in Louisiana, and made his way to Chicago in 1957, where he won a recording contract with Artistic Records. He then became a session guitarist for Chess Records and recorded with Junior Wells on Delmark Records before striking out on his own to eventually become an American music icon.He has been honored as a living legend by the Kennedy Center. 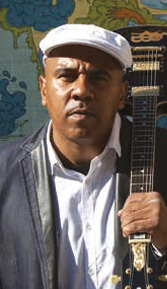 Ronnie Baker Brooks, 49, was born in Chicago to renowned bluesman Lonnie Brooks. He first picked up a guitar at age six, and by 19 Ronnie and his father joined musical forces and began touring the world together. Ronnie played with some of the most legendary names in blues: B.B. King, Buddy Guy, Koko Taylor, and Eric Clapton among others. His solo albums bridge the generational divide, fusing hip-hop and rap with more traditional blues. “With music, it all comes from the heart. It comes from the heart and from the soul.” 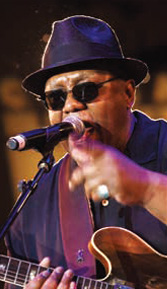 Born in Chicago in 1953, Carlos Johnson is considered one of the preeminent blues guitarists in the world today. For more than 20 years, before becoming the leader of his own band, Carlos was in demand by many of the greatest names in blues, with whom he toured the world. A southpaw, he combines the deep, raw blues sound of the traditional Chicago West-side style and jazzy phrasing with a more contemporary, funky sound. His personal and powerful vocals, along with his charismatic stage presence, makes him one of the most exciting performers in the blues today. Carlos is a rising star of the blues and one of the keepers of the Chicago blues flame. This recording highlights his unique and personal vocal style. 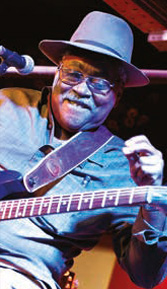 Jimmy Burns, younger brother of bluesman Eddie Burns, cut his teeth in the Northern soul recording industry early in his career, then retreated from the musician’s lifestyle to raise his family. Born in Dublin, Mississippi in 1943, Jimmy returned to the scene once more to sing the blues in the 1990s. After long days running his barbeque stand, Jimmy would strap on his guitar and hit the West Side’s club circuit at night, eventually snagging a long-term residency at the Smokedaddy Club. He released his long-awaited full-length debut album, Leaving Here Walking, in 1996. Jimmy continues to ride the wave of his comeback, providing fans with soulful, electrifying blues wherever he goes. 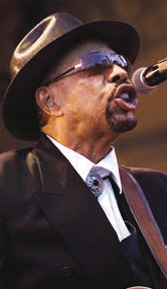 John Primer first borrowed a guitar at 8 years old, learning how to play by listening to Jimmy Reed, Muddy Waters, Little Milton, Elmore James, and B.B. King on his grandmother’s radio in Camden, Mississippi. In 1963 at 18 years old, John set off for Chicago, quickly becoming a respected force in the South and West Side scenes. In 1974 he joined the house band at Theresa’s Lounge, allowing him to play with the architects of the Chicago sound. He was recruited by a series of blues legends over the following decades, playing in the bands of Willie Dixon, Magic Slim and Muddy Waters, who was his mentor and father figure. Finally, in 1995, John broke out on his own with a debut album that established him as one of the premier living practitioners of traditional electric blues. John’s centennial tribute to Muddy Waters was nominated for a Grammy Award in 2016. 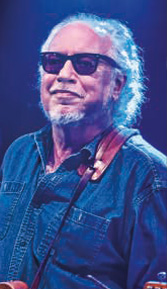 Boston native Bob Margolin was born in 1949. At 15, he was inspired by Chuck Berry to join local rock and blues bands. In 1973, Muddy Waters recruited him and Bob toured the world, playing with the best for more than eight years. In 1975, he played on Muddy’s Grammy-winning final record for Chess Records, alongside Paul Butterfield and Levon Helm and Garth Hudson from The Band. The next year, he performed with Muddy at the Band’s ‘Last Waltz’ farewell concert. After recording another handful of records with Muddy, three of which won Grammys, Bob left to start his own band. Over the years, he played on several Grammy-winning records, and in the mid-90s he began a second career as a music journalist. Bob’s collaboration history reads like a “who’s who in the blues” list, and he continues to back an astonishing array of musical talent. 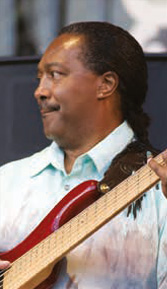 Felton Crews’ impressive range and musical flexibility led him to be placed in high demand among the world’s top musician across multiple genres. When Miles Davis recorded his comeback album, The Man With the Horn, Felton was the first bassist he called, and in 1986, he joined Miles’ touring band. Felton has also played with soul and blues artists such as Otis Clay, Otis Rush, Junior Wells, Son Seals, Billy Boy Arnold, and Charlie Musselwhite among many others. He earned a Grammy nomination in 2010 for his work on the album The Chicago Blues: A Living History. For Felton, “music is the nutrient of our souls; the pulse of our spirit. It’s the passport of our minds and the owner of our hearts. A world filled with love and creativity shall ring as one; a chord that resounds infinitely.” 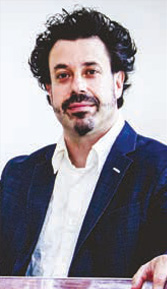 Johnny Iguana is one of the most accomplished blues piano players in Chicago today. He was raised in Philadelphia where he led his own bands since he was a teenager before moving to New York City. It was there where Johnny was hired by Junior Wells at age 23. He followed Junior to Chicago where he has lived ever since. He recorded and toured the world with Junior for three years. Johnny has also toured or recorded with Buddy Guy, Otis Rush, Koko Taylor, Carey Bell, Lil’ Ed, Otis Clay, Lonnie and Ronnie Brooks, Sugar Blue and many more. 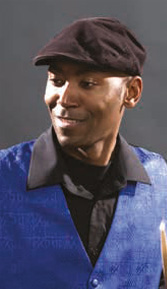 Kenny “Beedy-Eyes” Smith grew up in Chicago in the house where Muddy Waters once lived. His father, Willie “Big Eyes” Smith, played drums in the Muddy Waters’ Band for decades, and he spent his childhood surrounded by blues icons. Snagging numerous awards, including a Grammy, Kenny has made his name as an outstanding studio musician and performer. Among his many collaborators and friends are such names as Honeyboy Edwards, Pinetop Perkins, Buddy Guy, Billy Boy Arnold, Taj Mahal, Junior Wells, Koko Taylor, Muddy Waters, Keb Mo, Louisiana Red, and Jimmy Rogers, to name but a few. Kenny is a master of the post-war Chicago blues style, but his remarkable flexibility as a drummer has allowed him to play many different styles with a long, impressive list of artists. 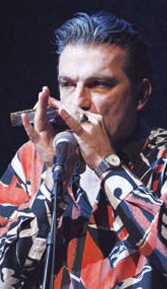 Vincent Bucher learned to play the harmonica at the age of sixteen and was quickly recognized as a blues harp player of extraordinary talent, and began accompanying blues greats including: Louisiana Red, Jimmy Johnson, Sonny Rhodes and others. He has led his own groups for over three decades and has played extensively with Blues, Roots and African artists throughout Europe, Africa and the United States. Considered one of the most accomplished harmonica players anywhere, he is a singer, composer, songwriter and arranger who uses his unique versatility and experience to explore the kinship between African music and the Blues. A founding member of Heritage Blues Orchestra, he was nominated for a Grammy Award in 2013 for his harp work on their debut album.